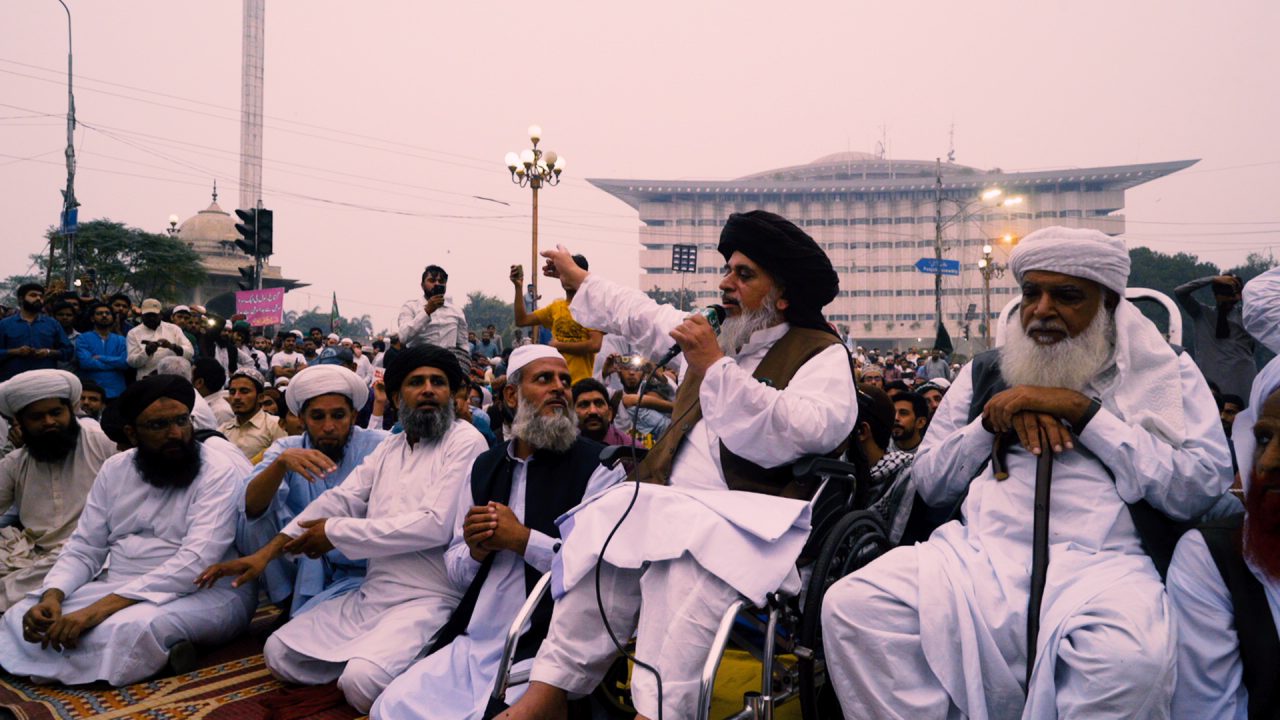 The Accused: Damned or Devoted

What was your motivation for making this movie? Why focus specifically on the Blasphemy Laws?

The Accused is a BBC Storyville Film Commission. In 2017, they approached me because they wanted to make a film on the Blasphemy Law in general. They consulted me because I’m a southern Pakistani documentary filmmaker and I had made several films and documentaries there. At first I actually refused. I mean, the security risk seemed just too high. But then something happened in November of 2017. I found myself in Islamabad, Pakistan’s capital, and I basically got stuck there when a protest started. The protest was led by cleric Rizvi. He got all of Islamabad to shut down, because he did not want our parliament in Pakistan to amend the language of the election oath. The government had planned on taking out Islamic references and for the protesters that was an act of blasphemy. Almost instantly the protest became violent. In the end the protesters were victorious, because the parliament rescinded their amendments and the law minister resigned. Furthermore, they gave money – grievance pay – to the protesters and apologized for ever pushing this law. That was the turning point for me. Here was another instance where we had a despot not only forcing the government to take back what was democratically passed. No, he was using Islam to push his own agenda, he was using militants and his own bias to gain power. I’m a Muslim myself. I might not be what you call very religious but I certainly did not want an authoritarian to use Islam to undermine my democracy. So I felt it was my duty to make a movie and to actually showcase that.

You show how much power Rizvi and his followers have over the whole country, the government and justice system as well. How they can get prison sentences overturned or laws to change. There is a follower of Rizvi who at one point says: “When politics fails, religion has to take over”. Do you think that is why Rizvi has so much power, because the political powers of Pakistan have failed?

Certainly. I would even go further. The thing with the many Islamic political parties is that they don’t really see a difference in politics and Islam. They think the two are very much intertwined and in fact Islam is its own way of conducting politics. Religion is a very important part of Pakistani identity and religious populism is a platform that Rizvi is able to use quite successfully to recruit so much power. And of course he also has some help from the Pakistani establishment. Because the public is ideologically aligned with his belief that the blasphemy laws should be preserved, other really big politicians like Imran Khan (current Prime Minister of Pakistan) align with people like Rizvi. They use them in politics to join together their support base. And Rizvi, when we were filming with him,  represented a voice that was mostly lost in Pakistani politics. He represented the people’s voice.

Rizvi certainly is a very charismatic figure, but as you mentioned before he is also very dangerous. His followers can be violent. So how did you go about making this movie and getting so close to them and interviewing them? What precautions did you take?

The entire filming period for this film was about two years. We interviewed Rizvi a few times during this period. But it was spread out and we had to be strategic. So I had a network of film producers and co-producers working with me on ground and we would cover different subjects or characters in the film for a specific amount of time. There were of course many people wanting to film or interview Rizvi. Our pitch was that we were going to be brutally neutral in our editorial. It made for an interesting story where I tried to take my editorial or subjective bias out of it as much as possible and it was also a safety precaution. One of the ways to be able to tell this story without getting myself, my crew or my subjects in trouble is if I presented the film in a way that had Rizvi’s point of view represented neutrally.

Many documentaries on human rights topics tell their story from the victims’ perspective, the dynamic between “the hero” and “the villain“ is clear. It was very unusual that you didn’t clearly distinguish the two but just told the story, as you said, in such a neutral way. Apart from safety reasons, why did you choose to tell the story this way?

In my more recent films – I’d say over the last seven or eight, nine years – I shifted from following “the usual victim’s story” or the protagonists being the victims because I myself felt a little exploitative and guilty. Although I am Pakistani I will be the first one to say that I come from a position of privilege in the sense that I split my time between New York and Karachi. I’m an anglicized Pakistani, although I grew up mostly in Pakistan. Even though I have informed consent, I have all the support from all of my subjects, I still felt guilty. I still felt the power dynamics, the privilege dynamics were too off. So that is why I decided: Why don’t we concentrate on the traditional antagonists, the oppressors?

So this way of framing was, as you say, to even out the privilege dynamics?

Yes, I think ultimately that’s what makes it interesting. I mean we have the privileged position of representing reality. So really it’s up to you, the audience. I certainly have my personal bias as to whom I think is the hero, but ultimately the audience can make their own judgment. And when I’m giving a chance to someone like Rizvi to tell his story, I don’t feel that privileged dynamic anymore. In fact, he’s more powerful than I am. So I don’t feel exploitative. In the end if we are to get change and make change then it’s important to understand where the other side is coming from. Even if you are vehemently against it, the viewpoints of people like Rizvi exist for a reason, they are not just in a vacuum.

Rizvi is certainly a character of contradictions, being the savior for some and the monster for others. But he also contradicts himself, when he says that Islam actually dictates protection of minorities. But then on the other hand, he clearly uses religion and Islam to attack others. And not only minorities. Most of the victims of the Blasphemy laws are actually Muslims themselves. He uses religion and blasphemy against people of the same faith. Why?

That was very important to me. I am in no way wanting to be diminutive or lessening the atrocities and the bigotries that minorities like Christians and Hindus have to face in Pakistan. It is truly terrible. What does get left out in reporting on these stories, though, is that actually Muslims themselves are victims, too. No one in their right mind would ever really commit blasphemy in Pakistan. It just goes to show you, in the four cases that I’ve highlighted in The Accused, that blasphemy is used as a way to silence people, as a way to exact revenge, as a way to demonstrate hatred towards a minority group. There is no actual case of blasphemy. It was really important for me to show: It does happen with minorities, but there are also cases where it was happening with Muslims. Islam is used in this unfortunate way to get people rallied up in Pakistan and get political support really quickly. Islam is used as currency in that way. That in its own right is actually kind of sacrilegious, it’s kind of going against the merit of the faith.

You can see under how much pressure the government with Imran Khan, who is also shown to be more right-leaning, and the justice system is from people like Rizvi and people supporting the Blasphemy laws. Do you think the system in Pakistan can overcome that pressure to change these laws?

I don’t think it’s a simple enough process that would happen overnight. But there are small things that can happen. For example, a lot of Rizvi’s followers were arrested and even Rizvi himself was in jail and he’s currently facing trial for treason and sedition charges. How serious the government is about pursuing those charges against Rizvi and some of the head leadership of that political party remains to be seen. In the last 20 years we have had religious political figures coming in and out, they become powerful and then some of them quickly fizzle out.

What has to change is the political and the public psyche. People are so vehemently against blasphemy that they take punishment for it into their own hands and they become lynch mobs – they kill people. Without due process. However, accusing someone of false charges of blasphemy would also carry a serious punishment. So there is a chance to set a legal precedent. That could begin the undoing of the way the Blasphemy law is used right now, which is to punish anyone openly and freely. I think it is sort of small amendments in the law itself that we could use to undo some of the destructive elements that are now present. But I think that’ll take time.

I think documentaries can be great tools. When we talk about nuanced topics like the intersection of socio-political issues and human rights, documentaries are able to shine a light on stories that don’t necessarily have the world’s attention. And so you’re kind of giving voice to the voiceless. I don’t take that position lightly and I’m really privileged to be able to do so. With the advent of streaming services the documentaries themselves are becoming much more democratic and universal. So when I’m making a documentary it’s not necessarily only for a Western audience that is into documentaries. If you get it on platforms like Amazon Prime or Netflix – there documentaries are available worldwide. For example, with Among the Believers, even though that film was banned in Pakistan, there are a lot of people who were able to watch it on Netflix. But of course it’s important that people in Pakistan watch that film. That’s the most important.